The Cabbage Patch Restaurant is located in the heart of Historic Downtown Snohomish, the "Antique Capitol of the World ". The restaurant offers delicious breakfast, lunch and dinner choices in a turn-of-the-century atmosphere. Like dining in yesteryear, the Cabbage Patch prides itself on providing the quality, portions and fresh ingredients that one would have received fifty years ago.

The Cabbage Patch Restaurant's charming decor features antique furniture and artwork by renowned local artist, Jim Davis. Many of the antiques and paintings in the restaurant are available for purchase. 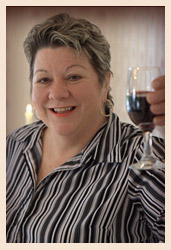 The Cabbage Patch began serving Snohomish residents on June 15, 1975 and quickly became one of the most popular dining experiences in the valley; its antiques and home-like atmosphere embodying the celebrated Snohomish spirit. The house, dating back to 1905, has also been a residence, a boarding house and an antique store containing Native American artifacts.

In its history, the Cabbage Patch has tripled in size from its original thirteen tables. The newer areas include the Garden Room, kitchen, upstairs dining room, and the quaint Fireside Lounge.

The Garden Room (once the back porch of the building) can accommodate up to thirty guests - be sure to see its magnificent window! The Library Lounge, named for its casual library feel, seats up to fifty guests, providing a comfortable and relaxing atmosphere upstairs. 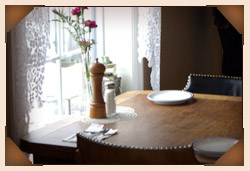 The Cabbage Patch apparently has some guests of the apparition persuasion. Over the years, patrons, employees and passersby have reportedly seen the ghost of a young girl in the upstairs dining room, on the stairs and even through the upstairs windows.

Restaurant workers claim to have had dishes moved or broken, and have heard glasses clanging upstairs when no one is around to create the noise. One customer, while talking to Sondra, the owner, said she saw a young girl wearing a white dress, floating a few feet behind Sondra.

Recently, while photographing the restaurant, a photographer and stylist had an eerie experience in the upstairs Library Room. The lace curtains (photo, left) began moving in one of the windows as soon as one of them mentioned the legend of the ghost. No one else was in the room, and no vents or windows were blowing air to cause such a stir.

In 2007, a group of ghost hunters from Paranormal Research and Investigations wanted to perform an overnight vigil in the restaurant to see what they could capture. The results are quite chilling.

It has been said that back in the early 1900's, a young girl, Sybill Sibley, fell down the stairs and broke her neck. Since the Cabbage Patch Restaurant opened, the ghost of a young, dark-haired girl has been seen and felt, and people have experienced being tripped on the last stair proceeding down the stair case.

The investigators researched the census history of the previous occupants, and found that Sybill actually died in Pierce County in 1930, but most likely followed her family to the Cabbage Patch property in 1954.

The psychics, Russ and Sandy, felt the presence of not only Sybill, but that of an older man; a sandy haired man in a dark jacket and white shirt cuffs, whom they believe may be Sybill's uncle. Sybill was afraid of the male entity, and the psychics received a vision of Sybill not falling down the stairs as had previously been thought, but pushed down the stairs after a struggle ensued with her uncle. Sandy could see his hands on her shoulders as he let her topple down the stairs.

In the upstairs dining room, Sybill would communicate with the psychics by using the sound function of the EMF meter. For 45 minutes, the team asked Sybill as series of questions and asked Sybill to respond by making the meter spike if her answer was yes. Sybill knows she has passed on but is afraid to cross over for fear that her uncle will be there waiting for her. She was also very sad when the Cabbage Patch caught fire, but was pleased when Sondra re-opened the restaurant.

Also during the investigation, the psychics experienced temperature fluctuations, photo and video orb anomalies, and most frightening was the EVP (Electronic Voice Phenomena) capture of a male voice saying, "Go home!," while they were questioning Sybill.

They also felt the presence of a collie dog in the kitchen, who they believe belonged to Sybill before she died. Russ thinks that employees might feel a "brushing against their legs" sensation when they are in the kitchen. He was right, employees have indeed reported this strange phenomenon.

There is another male apparition who moves about -- a Chester Billington -- with red hair and a long mustache, whom the team encountered at the Inside Out retail shop just next door on Avenue A during a previous investigation. Sandy had, during that earlier vigil, experienced a sharp pain on the right lower side of her head during their communication. Sandy has inferred that Chester died from a blow to or a gunshot to the head. Russ picked up on the fact that Chester had been stationed in the Pacific Theatre during World War II on one of the islands held by the Japanese. They believe he came back to Snohomish to be close to his family and frequently moves from building to building along Avenue A.

So, the next time you stop by to have some lunch or dinner at the Cabbage Patch, don't be alarmed if you experience a tug on the ear, a brush against the leg or see a face in the window... Happy ghost hunting!

Print this Page
Tip - Use Print Preview to see how many pages can print and select those you want.